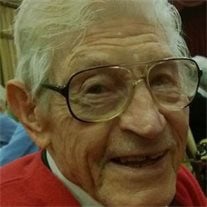 Edwin J. Olowin "Ed" went to be with his Lord Jesus in heaven on Friday, October 4th. He is survived by his sons Edwin Olowin, Jr., and Michael Olowin, daughter-in-law Lila Olowin, grandson Christopher Olowin and granddaughter Teresa Olowin, Edwin was born on February 26, 1924 in Erie, Pennsylvania, the son of Jacob and Anna Olowin. He had two brothers and two sisters. As a young man, he graduated from Erie Tech and started his career as a machinist. Soon after that, he was drafted into the army to serve in World War II. He was honorably discharged and returned to war time production at Keystone Crankshaft PT Boat Division. It was during this time that he met the love of his life, Victoria Ozimek. On July 5th, 1947 they were married at St. Anthony's Church in Cambridge Springs, Pa. The following year, they were blessed with the arrival of their first born son Edwin Olowin, Jr. In 1952 they moved to West Palm Beach, Florida where they made their new home. In 1962, they were once again blessed with the birth of their second child, Michael Olowin. While being a loving husband and father, Edwin worked at Burdines in Downtown West Palm Beach for twenty five years. During that time, he also began his real estate career. While balancing his work schedule, he still found time to enjoy fun times with his family. He enjoyed traveling and seeing new places. His retirement years were enjoyed by going on mini vacations and cruises with his wife. With his strong Catholic faith, he was a parishioner at St. Francis Catholic Church, and later at St. Paul of the Cross Catholic Church. He was among the founding members of the Knights of Columbus Council 4999. For over fifty years, he was a staple at the Knights of Columbus, where he assisted in various activities and events that were held there. He served as the Grand Knight of the Council in 1993. He also served as a member of the Fourth Degree Color Guard. Edwin and his wife were always present at every dance that the Knights of Columbus held. He loved to be around family and friends. He always made everyone smile by the kind words and gentle smile he so freely gave. In his later years, he loved spending time with his grandchildren, taking them for walks, or out to get a bite to eat. He loved watching them grow up, and was blessed to see his grandson graduate from high school and his granddaughter graduate from middle school. He loved attending family events and functions, and seeing his grandchildren perform at piano and dance recitals. Family was the center of his life. He always had a special devotion to the Holy Family and a special love for his earthly family. He was always there to offer the prayer of the Rosary for anyone in need. He was a devoted husband to his beloved wife Victoria for 64 years, a loving and supportive father and grandfather as well as loving uncle to his many nieces and nephews. It is that strong faith and love that are forever his legacy. A wake will be held at Taylor Modeen Funeral Home, 250 Center Street, Jupiter, FL 33458; on October 10th from 4 to 8 PM. A funeral Mass will be held at St Paul of the Cross Catholic Church located at 10970 Jack Nicklaus Drive, North Palm Beach, FL 33408; on October 11th at 10 AM. A graveside service will follow at Royal Palm Memorial Gardens in West Palm Beach, FL.

The family of Edwin J. Olowin created this Life Tributes page to make it easy to share your memories.

Edwin J. Olowin &quot;Ed&quot; went to be with his Lord Jesus in heaven...