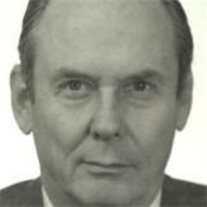 Edwin Charles McManus 92, passed away April 4, 2011 after a courageous battle with heart disease. Ed was sustained throughout his life by an unfaltering devotion to his family and his faith. He was a generous and loving husband, father, grandfather, brother and colleague. He was born in Kingston, NY and was a resident of Jupiter since 1984, having lived in Mt. Lebanon, PA and Short Hills, NJ previously. He earned his BA from Holy Cross College and his MBA from Harvard University. He served in World War II as an Army Captain in New Guinea and Australia and as a Major in the Pentagon. In his Labor Relations career, he held management positions at Ford and General Dynamics. He joined Rockwell International in Pittsburgh in 1971, serving as a Vice President until his retirement in 1984. In retirement, with his wife he was an avid traveler, golfer and boater. He had three holes-in-one, and instilled the love of golf and tennis in his children and grandchildren, hosting annual family golf and tennis tournaments. He was predeceased by his identical twin Tom, his brother Jack, sister Mary, and by his grandson Tommy Wolf. He is survived by his wife of 56 years Elinor, six children, Ed of Austin, TX; Eleanor Moffat (Gary) of Cincinnati; Mary Wolf (Stephen) of Oklahoma City; Carl of Titusville, FL; John (Suzanne) of Austin, TX; and Matthew of Alexandria, VA. He also leaves nine grandchildren Gary, Stephen, New, Meghan, Kyle, Kalie, Jack, Conor, and Maryclaire. A Mass of Christian Burial will be held at 10 AM, Thursday, April 7, 2011 at St. Patrick's Church, 13591 Prosperity Farm Road, Palm Beach Gardens, FL. Interment will follow at 2:15 PM, Thursday at the S. Florida VA National Cemetery in Lake Worth, FL. In lieu of flowers, those who wish may make donations in Ed's name to Jonathan's Landing Cares, 16823 Captain Kirle Drive, Jupiter, FL 33477. For directions & online condolences, please visit www.taylorandmodeen.com./ Taylor & Modeen Funeral Home Family Owned & Operated (561) 744-2030, Jupiter, FL

Edwin Charles McManus 92, passed away April 4, 2011 after a courageous battle with heart disease. Ed was sustained throughout his life by an unfaltering devotion to his family and his faith. He was a generous and loving husband, father, grandfather,... View Obituary & Service Information

The family of Edwin C. McManus created this Life Tributes page to make it easy to share your memories.