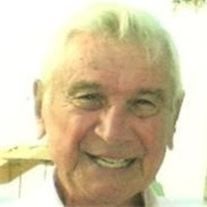 Edmond Jean Le Moal, 87, of Tequesta, FL formerly of New Canaan CT, passed away at home on October 15, 2011 surrounded by loving family members. In WWII, he trained with the U. S. Army Rangers, and was awarded the Bronze Star for service with U.S Army Intelligence, responsible for troops in China evaluating movements of Japanese troops in Japanese held Chinese territory. A graduate of Harvard University, Class of '44, he held international corporate marketing and management positions including with SmithKline Beckman, and Mead Johnson/ Bristol Myers, was International VP for the pharmaceutical division of E. I. Du Pont de Nemours, and was a past president of the Mid-west Pharmaceutical Marketing Association. He retired to serve as a financial counselor with Dean Witter Reynolds and as a business consultant to local industry through his own company, Fairfield Resources. He was a member of Tequesta Country Club, life member of The Elks, active in the Jupiter Medical Center Auxiliary, served as a lector at St. Jude's Church, traveled extensively, and was fluent in French, Spanish, Italian, German, Chinese, and Breton, and conversant in several other languages. He volunteered at local schools to share his love of languages. He was an avid reader, poet, golfer, and bridge player. Mr. Le Moal is survived by his children Michele; Denise; Danielle, E.J., and Simone; grandchildren David, Patrick, Kevin, Hayley, Tyler, and Andrew, and their spouses and partners, four great-grandchildren, cousins, nieces and nephews, and was predeceased by his wife of sixty years, Rita Bridget Quinn, whom he married in Shanghai China, and a son John. A Mass of Christian Burial will be celebrated at 1PM, Saturday, October 22, 2011 at St. Jude Catholic Church in Tequesta with the interment at 3 PM, Saturday at Riverside Memorial Park. Graveside Military Honors by the US Army will be presented. Friends are invited to meet with the family from 5-7 PM, Friday, October 21st at the Taylor & Modeen Funeral Home, Jupiter. In lieu of flowers, memorials may be made to John C. LeMoal Scholarship Fund, Dartmouth College Development Office, Hanover NH 03755 or to the Palm Beach County Hospice, 5300 East Avenue, West Palm Beach, FL 33407. For directions and online condolences, jplease visit www.taylorandmodeen.com. Taylor & Modeen Funeral Home Family Owned & Operated (561) 744-2030, Jupiter, FL

Edmond Jean Le Moal, 87, of Tequesta, FL formerly of New Canaan CT, passed away at home on October 15, 2011 surrounded by loving family members. In WWII, he trained with the U. S. Army Rangers, and was awarded the Bronze Star for service with... View Obituary & Service Information

The family of Edmond Jean Le Moal created this Life Tributes page to make it easy to share your memories.