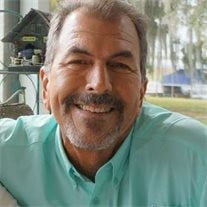 Donald Roger Savoie, 59, of Jupiter, died Friday, February 7, 2014. "Donnie" is the son of the late Roger Savoie and Pauline Deedrick of Eatonton, GA. He is survived by his loving family, wife Wilma "Willie", and 4 sons Robert, Jeffrey, Adam, and Eric. He is also survived by his siblings, Susan, Diane, Jerry and Carol as well as many loving aunts, uncles, and cousins. Originally from Manchester, NH, Donnie has lived in South Florida for 52 years. Employed as a construction superintendent for American Engineering, he was well respected in the land development industry. Donnie's love for his boys, and commitment to his family was evident in the time he spent outdoors with them at sporting events, golfing, boating, and fishing. He was a "keeper". A visitation for family and friends will be held at Taylor & Modeen Funeral Home in Jupiter on Sunday, February 09, 2014 from 3:00 – 6:00 p.m. A funeral mass will be held at St. Peter Catholic Church in Jupiter on Monday, February 10, 2014 at 10:00 a.m. In lieu of flowers, contributions in memory of Donald Savoie may be sent to the PNC Bank, 10058 West Indiantown Road, Jupiter, FL 33478; (561) 748-1380.

The family of Donald Roger Savoie created this Life Tributes page to make it easy to share your memories.