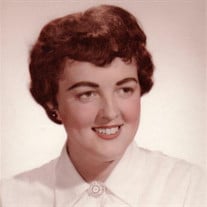 Dolores Mary Scafidi October 29, 1935-September 20, 2018 Dolores M. Scafidi, 82, passed away Thursday September 20th at home. She was the kindest, gentlest woman and a dear friend to all who knew her. Dolores was born in North Plainfield, NJ in 1935 to the late William and Viola McDonough. Her love of our Lord led her to the Sisters of Mercy as a novitiate from St. Joseph’s Parish. Shortly before her final vows she left the convent, as she heard God calling her to work with children. She attended Seton Hall University in the evening program and received her Bachelor of Science in Education in June of 1960. She went on to obtain her certification from the Department of Education as a secondary School Teacher of History. She taught in the Warren Township, NJ School District. On June 30th, 1962 she married her beloved husband and soulmate of 56 years Nicholas Scafidi and started her family. While her children were small she worked at Ireland Private School in Trenton teaching several different grade levels. She was a wonderful teacher and was beloved to her students. After relocating to the shore, she worked at Fellows, Reed and Weber Engineering. In 1977 she left to assist her husband in running their printed circuit board manufacturing business. She had a fondness for fishing on their boat, swimming at Tices Shoal and entertaining family in the summers. Upon their retirement they relocated to Jupiter Florida near their son and enjoyed many afternoons watching the boats in Jupiter Inlet and birdwatching from their patio. Dolores is predeceased by her father and mother, William and Viola McDonough and her sister MaryAnn Areminski. Dolores is survived by her loving husband, Nicholas, her daughter Rosemary and son-in-law Ralph Della Sala, whom she loved as a son, her grandchildren Ralph Della Sala and his wife Victoria, and granddaughter Kristen Della Sala. Her son Nick Scafidi and her daughter -in-law Bea, whom she loved as a daughter; her grandsons Austin Scafidi, Nicholas Scafidi and his wife Caitlyn, and Chaz Scafidi. Her youngest daughter Mary Joy and son-in-law James Volinski, whom she loved as a son, and her granddaughter Alicia Volinski. She is also survived by her brother William McDonough and her sister-in-law Pat McDonough. Her sister Viola and brother-in-law Bob Strumpfler, and her sister June Stevens, and many nieces and nephews. She is also survived by her brother-in-law Augustine Scafidi and his wife Maureen and sister-in-law Jeanette Jennings. The family will receive friends from 5:00 pm -8:00 pm on Tuesday September 25th at Taylor & Modeen Funeral Home, 250 Center Street, Jupiter FL. A mass of Christian burial will be held on Wednesday September 26th at St. Peter’s Roman Catholic Church 1701 Indian Creek Parkway, Jupiter FL at 10 am. Cemetery Details: Riverside Memorial Park 19351 SE County Line Road Jupiter FL 33469 Online condolences may be offered at www.taylorandmodeen.com

Dolores Mary Scafidi October 29, 1935-September 20, 2018 Dolores M. Scafidi, 82, passed away Thursday September 20th at home. She was the kindest, gentlest woman and a dear friend to all who knew her. Dolores was born in North Plainfield,... View Obituary & Service Information

The family of Dolores M. Scafidi created this Life Tributes page to make it easy to share your memories.