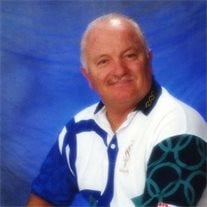 Delmar (Del) Starks passed away in Jupiter, FL on July 4, 2011 at the age of 67, surrounded by family and friends. Though he bravely fought Melanoma cancer for 2 years, he succumbed to sudden cardiac arrest while at the Jupiter Medical Center for an unrelated issue. Born in NYC September 2, 1943, Del, PGA Life Member, began his golf ambition as a caddy at the Inwood Country Club. Soon after, he moved to Ft. Myers, FL where he was encouraged to pursue a golf as a career by Patty Berg. Del eventually moved to Michigan where he became the head Pro at Arbor Hills Country Club in Jackson for several years. In the early 80's, Del was offered an opportunity to be the head teaching pro at Doral Country Club in Miami, under Jimmy Ballard. Until his untimely death, Del taught at Abacoa Golf Club in Jupiter, FL for many years, coaching many PGA and LPGA players, as well as emerging talent and other sports heroes. It was his true life's passion to see his students succeed and share his love of golf. By popular demand, many of Del's students were anxiously awaiting his book, which was nearly completed. In his honor, Del's family will finalize his book and make it available in the coming months. Del is survived by his wife of 46 years, Donna; daughter, Sherri (Phillips); son-in-law, Curt; grandson, Eli of IN; daughter, Erin of FL; brothers Gerard, James and Lee - plus several friends, colleagues and clients. He's preceded in death by his parents, Edna and Delmar II; sister, Marie and nephew, Daniel. At Del's request, no funeral service is scheduled. Instead, a Celebration of his life will be held on his birthday (September 2) in Jupiter, FL. Details will be announced on his website: www.delstarks.com. The family wishes to thank the dedicated staff at the University of Miami Sylvester Cancer Center and the Memorial Regional Hospital Hollywood; their genuine care meant a lot to Del during his treatments. In lieu of flowers, gifts in memory of Del Starks may be made to either facility by visiting their respected websites: www.sylvester.org/community/how-to-give/online-gift or www.mhsfoundation.org

Delmar (Del) Starks passed away in Jupiter, FL on July 4, 2011 at the age of 67, surrounded by family and friends. Though he bravely fought Melanoma cancer for 2 years, he succumbed to sudden cardiac arrest while at the Jupiter Medical Center... View Obituary & Service Information

The family of Delmar "Del" Starks created this Life Tributes page to make it easy to share your memories.