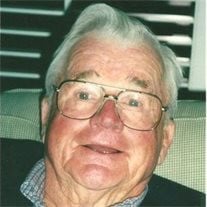 We live in an age of over hyped "super stars." We deem people "heros" for some fleeting insignificant accomplishment. There was a time, however, when a man was measured by how he led his daily life, the way they treated their fellow man–not in a fleeting moment, but over a lifetime of actions and deeds. Those who lived such a life were known as "good men." Our father was such a man. Our father was born in 1917; the only boy with four sisters. He grew up during the Great Depression and served his country during the Second World War aboard the USS South Dakota. He saw action in the South Pacific and North Atlantic. He once told us how an enemy dive bomber hit his ship, but the bomb did not explode. He and his crew had to sail from the Pacific around Cape Horn, all the way to Brooklyn Navel Yard, with a live bomb in the bowels of their ship. After the war, together with my mother, he raised six children and put all of us through college. It was a safe, loving home, and although our father found it difficult to express his love in words, he did so in actions. To our cousins he was known as "Unc" their surrogate father. To his grandchildren and great grandchildren he was "Poppy." He enjoyed watching them grow up and was proud of all of them. To his many, many friends…if you were lucky enough to be a friend of our father's you had a friend for life. Our father was a tough and stubborn Irishman with a heart of gold. He devoted himself to his wife, Molly, whom he was married to for 65 years. We all miss our "Poppy," but feel comfort in the fact that we know where he is. We will forever be watched by our super star, our hero–our good man. A Memorial Mass will be held 12 Noon, Saturday, February 25, 2012 at St. Jude Catholic Church, Tequesta, FL.

We live in an age of over hyped "super stars." We deem people "heros" for some fleeting insignificant accomplishment. There was a time, however, when a man was measured by how he led his daily life, the way they treated their fellow man&#8211;not... View Obituary & Service Information

The family of David John O'Meara created this Life Tributes page to make it easy to share your memories.

We live in an age of over hyped &quot;super stars.&quot; We deem people...