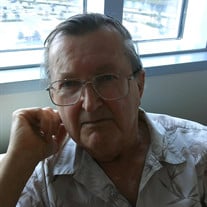 A Tribute to the Boy and Man that I have loved all my life, Davey Boy………. David Ray Hoffman was born August 6, 1937 in Sparta, Monroe County, Wisconsin to Martha and Spencer K. Hoffman. He is survived by his loving wife, Olga. They met on a blind date on January 17, 1959 and have been married for 59 years. They have four children that he loves dearly, Andrea with her husband Mike Hill, Sandra, Dawn and Michael Kenneth with his wife Heather, five grandchildren, Johnathan, Ryan, Michael Kyle, Michael Forrest and Melissa and one great granddaughter, Addison. David is also survived by three sisters, Margaret, Kathy, Franny and Gretchen and one brother, Patrick. David worked all his life starting out as a paper boy at Camp McCoy Army Base. After graduation, he joined the Air Force where he excelled beyond expectations. He had an honorable discharge from active duty in August 1959 as an AC+W Radar Operator. He immediately got a job with Philco Corporation at the Empire, Michigan Air Force Base. After that, there was no stopping David and his family moved coast to coast at least thirty times. He was well educated and worked as an Electronics’ Engineer trouble shooter for facilities throughout the United States including Hawaii and Alaska. He was in charge of the electronic equipment for the control tower at PBIA and oversaw the management of the 1981 air traffic controller’s strike. He retired from the US Department of Transportation Federal Aviation Administration after over 30 years as an Electronics’ Engineer. He also served in the reserves for over two years. He loved boating and fishing! He was always able to have a boat for him and his family to enjoy and eventually retired in the home that he built on the water in Jupiter. He was a man of many talents. He could fix anything! We will still remember him working on and rebuilding car and boat motors on our dining room table. It was always his dream to travel across the country in a motor home and visit his family. I wish that could have happened. He loved everyone in his family in his own way. My husband encouraged us all and helped to take care of everyone the best that he could. We all love him and will miss him. My David Boy and Papa David will be laid to rest on Monday, November 26, 2018 at Riverside Memorial Park, Tequesta, FL. The family will receive friends from 5:00 - 7:00 PM Sunday, November 25, 2018 at Taylor & Modeen Funeral Home, Jupiter, FL. A funeral service will be held 11:00 Am Monday, November 26 at Taylor & Modeen Funeral Home, 250 Center St., Jupiter, FL 33458. The family will receive friends from 10:00 AM until time of service. Online line condolences may be offered at www.taylorandmodeen.com

The family of David Ray Hoffman created this Life Tributes page to make it easy to share your memories.

A Tribute to the Boy and Man that I have loved all my life, Davey...