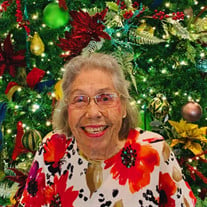 On the morning of December 22, 2021, a call went out through heaven that Darlene Crews was coming home. She departed this earth after 91 years, not from a hospital or nursing home, but from her “little box in the sky” at Phoenix Towers on Singer Island, exactly where she wanted to be. Darlene was born on a Tuesday, August 19, 1930, in Stuart, Florida. She moved with her family in the mid 1930s to Belle Glade where she attended Belle Glade Elementary. She graduated from Belle Glade High School in 1948. During her high school days, she was in the Pep Club, Glee Club, on the cheerleader squad, and played center forward on the basketball team during her sophomore, junior, and senior years. Her yearbook is quoted as saying, “Her merry ways are swell and in all sports she does excel," and she was named “Most Athletic” her senior year. On June 5, 1949, she married Cosby Crews at the First Baptist Church of Belle Glade. Their first home was located in Canal Point. Cosby and Darlene owned and operated grocery stores and convenience stores throughout their lives in Eau Gallie, Singer Island, and South Bay (the South Bay Supermarket and Quick Stop). In 1986, Darlene, at the age of 56, and Cosby retired. They would eventually sell their home in Belle Glade and move permanently to Singer Island. As full-time residents, Cosby and Darlene became fixtures at the local diners where they enjoyed countless meals with old and new friends. Their table was always full and full of laughs. After Cosby’s passing, Darlene came to enjoy a more relaxed schedule that included sleeping late, leisurely lunches, sunsets on the beach, and staying up late. Darlene did what she wanted, when she wanted! Darlene loved all people. Her quick wit, Southern charm, and folksy humor were a magnet. She attracted friends from all walks of life who considered her a living legend. Darlene’s stories always brought lots of laughs. Darlene is survived by her daughter Terry of Palm Beach Shores, Florida; her grandson John Matthew Workman of Palm Beach Shores; a sister, Donna Mae Challancin and her husband Mike; a brother Harvey “Sonny” N. Armstrong and his wife Beverly; a sister-in-law Sibyl Crews, and numerous nieces and nephews. Darlene is preceded in death by her husband, Cosby, and a baby daughter stillborn at full term. She is also preceded in death by her parents Robert Leonard Mobley and Hortense Griffin Armstrong; father-in-law George Crews Sr.; mother-in-law Fannie Crews; brother-in-law Gerald Schmidt; brother-in-laws Kenneth Moring, Jim Paul Crews, George Crews, and Ralph Crews; sister-in-laws Laura Crews, Margaret Hazel Crews, Mary Ellen Moring and Frances Schmidt; a niece Bobbette Crews Benjamin, and two nephews Gary Crews and Jimmie Lee Crews. A Celebration of Life for Darlene Crews will be held on Wednesday, January 5th. Visitation will begin at 10 AM with the service following at 11 AM at the First Baptist Church of Lake Park located at 625 Park Avenue, Lake Park, Florida. To view a livestream of the service please use the following link to the service by 11 AM: https://view.oneroomstreaming.com/authorise.php?k=1640915471156667 The interment service will be held at 3 PM at the Port Mayaca Cemetery located at 23900 SW Kanner Highway, Canal Point, FL 33438. Memorial flowers can be delivered to the First Baptist Church of Lake Park between 8 AM and 9:30 AM on January 5th, prior to the service. Taylor & Modeen Funeral Home 250 Center Street, Jupiter, FL 33458 561.744.2030 www.taylorandmodeen.com

On the morning of December 22, 2021, a call went out through heaven that Darlene Crews was coming home. She departed this earth after 91 years, not from a hospital or nursing home, but from her &#8220;little box in the sky&#8221; at Phoenix... View Obituary & Service Information

The family of Darlene Crews created this Life Tributes page to make it easy to share your memories.