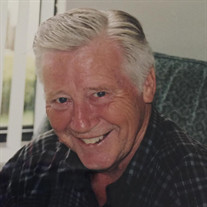 Dale Edward Guhr, age 86, passed away on Friday, June 5, 2020. He was born May 12, 1934 to his mother Mary Guhr (nee Parent) and father Charles Guhr in Millville, New Jersey. After graduating Millville High School in 1952, Dale married Phyllis Boggs of Millville and raised two children, Susan and Bobby. Dale worked as a freight agent for the Pennsylvania-Reading Seashore Lines until 1966. He began an accomplished career in the food processing business at PJ Ritter’s in Bridgeton NJ and then as the Vice President of Curtis-Burns foods in Mt. Summit, Indiana where he resided for 15 years. The lure of the Garden State with its many childhood friends, relatives, and Jersey tomatoes proved too tempting; Dale accepted the position of President/CEO of Venice Maid Foods in Vineland until he retired in 2000. One visit to Jupiter, Florida to visit his daughter convinced Dale to buy a home on the intracoastal waterway and enjoy courses coveted by golfers everywhere. Since his teen years as a wrestler and basketball player, Dale continued his love of sports and spent many hours watching his Eagles, 76ers, and hometown hero Mike Trout. His greatest joy was sharing time with family; as a doting Granddad he proudly attended every event his grandson Edward participated in. Dale’s keen sense of humor and uncommon wit were eclipsed only by his ability to instantly put at ease anyone in his company. He never met a stranger. Although he suffered the loss of his father while just a teen and the loss of many cherished friends in recent years, Dale will be remembered for his uncanny ability to always find the bright side of any situation. His abundance of joy would often escape in the form of a whistled tune or friendly banter with anyone nearby. Dale is survived by his devoted daughter Susan Guhr Rieck and Grandson Edward Rieck of Jupiter, loving son Robert (Missy) of Millville, beloved brother Donald Guhr (Joan) of Bel Air, MD and many nieces and nephews. He held a special place in his heart for Todd Moore of Millville, Lexi Polster (nee Rieck) of NYC, and Rachel Burke of Santa Monica, CA. He was preceded in death by both parents and his brother Charles “Chick” Guhr of Wildwood Crest, NJ. Dale attended Mt. Pleasant Church as a youngster and remained a believer his entire life. He possessed faith that we would one day be together again. We imagine him surrounded by McCafferty, Wilson, Sooy, and others… perhaps at Heaven’s 19th hole, laughing and telling stories, finding the bright side once again. The family would like to thank our friends and neighbors for their loving kindness and tender mercies during our time of grief. Due to unprecedented times, a memorial service will be held in the future to celebrate Dad’s life. On the bright side, it gives us time to warm up our whistles. For condolences visit www.taylorandmodeenflorida.com

The family of Dale Edward Guhr created this Life Tributes page to make it easy to share your memories.