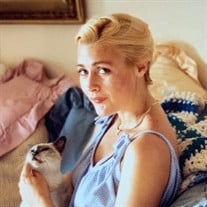 Cornelia N. Church Leshay Passed away peacefully at home on October 2, 2019. She was born in Winsted, CT to Courtney H. Church and Gladys Honald Church. Criki was known as one of the beautiful Church twins growing up in Barkhamsted. She excelled at 4H and Steer shows, winning reserve grand champion at Eastern States Exposition her senior year. She went on to study animal husbandry at the University of Connecticut. After relocating to Jupiter, Florida in 1979 she worked at the Lighthouse Restaurant before becoming a tea room model for Sophisticated Lady. She also was the smiling face at the Café Chardonnay for over 15 years. But Criki’s greatest most beloved roles were that of daughter, sister, wife, mother and grandmother. Criki was an avid athlete playing tennis, golfing, kayaking, diving, skiing, fishing and hiking. She traveled the United States, Bahamas, Canada and Europe but her home was always with her children and grandchildren. Known as Bahama Mama by her grandchildren and their friends, she spent her time teaching them a love of all athletics or any other fun activity that could be had. Criki’s loss will be felt by all who had the privilege to be in her light. Criki is survived by her husband, Carter Fairchild; Siblings Spencer Church, Bonny Gilson, Courtney Anstett and Naomi Church.; Forever missed and deeply loved by children Maney Leshay and Marcey Leshay Moss; Always loved and devoted to her amazing grandchildren Rachel Broedell, Francis Broedell IV, Bryce Broedell, Hylon Leshay and T. Donald Moss IV. She will forever love her daughter in love Christine Leshay and sons in love Frank Broedell III and Donny Moss III; Brothers in love Gerald Anstett, Neil Burr, Dennis Santoro; Sister in love Jane and many beloved nieces, nephews and friends. A Celebration of Life will be held on Sunday, October 6, 2019 from 3PM to 6 PM at Pirates Cove Resort & Marina, 4307 SE Bayview St., Stuart, FL 34997. In lieu of flowers donations may be made to Big Dog Ranch or an animal rescue of your choice. For directions and online condolences visit www.taylorandmodeen.com

Cornelia N. Church Leshay Passed away peacefully at home on October 2, 2019. She was born in Winsted, CT to Courtney H. Church and Gladys Honald Church. Criki was known as one of the beautiful Church twins growing up in Barkhamsted. She... View Obituary & Service Information

The family of Cornelia Church Leshay created this Life Tributes page to make it easy to share your memories.