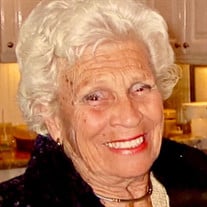 Our beloved mother, Constance Elizabeth Keahon, died peacefully Saturday morning, March 13, 2021 in Jupiter, Florida. Connie was preceded in death by her husband, the love of her life, Gerald Robert Keahon and her devoted mother, Elizabeth Hoppe, affectionately known as Granna. Connie’s character, strength, independence and zest for life developed early as, together, she and her mother rose above a divorce and the Great Depression. The bond lasted a lifetime. Connie was born on Long Island in Rockville Centre, New York, on June 19, 1921 and grew up in Lynbrook, New York. After marrying Jerry in 1942, she worked as a secretary at the Pentagon while Jerry attended the school of dentistry at Georgetown University. She raised four children in Lynbrook and travelled the world with Jerry to faraway destinations in Canada, Europe, Africa, Mexico, and Central America, the Caribbean, and South America, as well as visiting all 50 states, many via car trips. She also managed the administration of the dental practice and held a managerial role at A & S Department store in Hempstead. Summers with family and dear friends at Sun and Surf Beach Club highlighted her years. In 1985, post-retirement, they relocated to Phoenix, Arizona to enjoy family and sunshine until Jerry’s death in 1998. Drawn by the birth of her first great grandchild and the lure of returning to coastal living, she embarked on a new chapter in Jupiter, Florida in 1999. Daily she greeted the sunrise on the balcony, followed by coffee and digesting the local newspaper, sports first, cover to cover. Her joy was talking with each of her four children, listening to Frank Sinatra and Rod Stewart, and watching golf. Remaining independent, she enjoyed another 20 years surrounded by great neighbors as her family continued to grow. She did it “her way”. She is survived by four loving children, Susan Fusaro (Eugene) in Jupiter, Fl., Peter Keahon (Stephanie) in Jupiter, Fl., Debra Klar (Gregory) in Annapolis, Md., Constance Tabacchi (Alan) in Castle Rock, Co. and sister-in-law Jane Keahon in Phoenix, Az. She also leaves behind four grandchildren, three step grandchildren, seven great grandchildren and six step great grandchildren. Connie/Mom/Nanny lived a charmed and exciting life of more than 99 years. She graced us all with her spark, smarts, and timeless style that will always shine brightly in the memories of everyone in her life. Glimmer on and God bless you, Mom! A memorial service will be held at 10:00 am April 29, 2021 at St. Patrick Catholic Church, 13591 Prosperity Farms Road, Palm Beach Gardens, Florida 33410 followed by a private burial at South Florida National Veterans Cemetery. In lieu of flowers, those planning an expression of sympathy are kindly asked to consider contributions to the Busch Wild Life Sanctuary, Jupiter, Florida.

The family of Constance Elizabeth Keahon created this Life Tributes page to make it easy to share your memories.