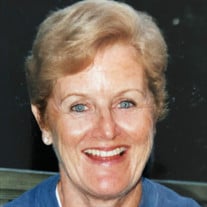 Clodagh Lovat Steegstra Smith (née Church) died unexpectedly in Jupiter, Florida on June 5th, 2019 at the age of 83. Clodagh is survived by her husband, Martin; her children Robyn, Caroline, Michele, Arjen and Randy. She is also survived by her stepchildren Martin III, Christopher and Terence Smith as well as her grandchildren Arjen Jr., Malcolm, Summer and Hunter Steegstra and Owen, Anya, Clayton, Adam, Sam, Mariah and Evan Smith. She was preceded in death by her first husband, Arjen Steegstra and her brothers Rodney and Malcolm Church of South Africa. Clodagh was born on March 18, 1936 in Port Elizabeth, South Africa to Lionel and Margaret Church. She attended Rhodes University, South Africa. She married Arjen Steegstra in Port Elizabeth and moved to the United States with him in 1955. While raising five children on Cape Cod, Clodagh used her skills to start several small businesses with a friend. She loved gardening, tennis and playing bridge. After her first husband died, Clodagh was lucky enough to find love a second time with Martin Smith of Hartford, Connecticut who she married in 1991. They had a long and happy life in Cape Cod, Massachusetts and Jupiter, Florida. Clodagh was happiest when taking care of others. Her children remember her as a warm and loving Mother who encouraged them to pursue their goals and challenged them to reach their full potential. She was known for her selflessness and kind attitude. Clodagh was a ferocious advocate for her disabled daughter Caroline’s well-being and she fought tirelessly to ensure that Caroline was a healthy and independent woman. A funeral service and burial will take place on Cape Cod later in the summer. In lieu of flowers, please give to the charity of your choice in her name.

Clodagh Lovat Steegstra Smith (née Church) died unexpectedly in Jupiter, Florida on June 5th, 2019 at the age of 83. Clodagh is survived by her husband, Martin; her children Robyn, Caroline, Michele, Arjen and Randy. She is also survived by... View Obituary & Service Information

The family of Clodagh Lovat Steegstra Smith created this Life Tributes page to make it easy to share your memories.