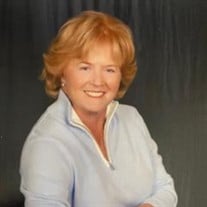 Clara Victoria Ninivaggi Palm Beach Gardens, Florida– Clara Victoria “Vicki” Ninivaggi (nèe Rivera) of Palm Beach Gardens, Florida passed away peacefully on February 6, 2022, in the loving arms of her husband, Angelo. Vicki was born in the Bronx, New York on May 9, 1941, to Mary Katherine (nèe Kiernan) and Victor Rivera. Vicki was a graduate of James Monroe High School in the Bronx. After high school, Vicki worked as a clerical associate in the family travel business. Vicki was introduced to her future husband, Dr. Angelo Donato Ninivaggi, on New Year’s Eve 1961. She was impressed by Angelo’s charm and dancing ability, he quickly proposed, and they were married for 58 joyous years until Vicki’s death. Vicki and Angelo first settled in the Bronx, New York where they worked together to establish Angelo’s dental practice and start a family; Angelo the dentist and Vicki the bookkeeper running the office. They then moved their growing family to Closter, New Jersey in 1969. In New Jersey, Vicki supported Angelo as he pursued an advanced degree in orthodontics - a commitment to education that she championed throughout her life. Together, they raised four children and the family relished their formative years together in Closter and golf at nearby Rockland Country Club. Vicki was a longtime parishioner of the Church of St. Mary in Closter where she was an active participant in the choir, a lector, a eucharistic minister, and a catechism teacher. After moving to Florida, she was a parishioner at the Cathedral of St. Ignatius Loyola in Palm Beach Gardens. She was as devoted to her family as she was to her Catholic faith. Vicki cherished her entire extended family, her children, and their spouses, but most of all, her grandchildren - whose pictures always sat on a nearby table. There was never a doubt that she would drop everything to nurture and support her family. There was no problem so big that it couldn’t be solved over a cup of tea or her world-famous pastina. Vicki also treasured family gatherings and holiday traditions and often marked those occasions by preparing truly wonderful meals. She specialized in all food Italian, except on St. Patrick’s Day when everyone was required to eat corned beef and cabbage. As a wife, mother and grandmother, she gave wholeheartedly, providing all that was needed for memorable holidays, vacations and life events. Shortly after retiring, she and Angelo created a wonderful family retreat in Sag Harbor, New York that provided a lifetime of memories for their family. The time in Sag Harbor brought joy and happiness to all who visited and was so important to Vicki; bringing her rapidly growing and dispersed family back home mattered greatly to her. She especially loved playing dominos and card games with her grandchildren and taking them to the beach. Later in retirement, Vicki enjoyed her time in Palm Beach Gardens. She was an avid bridge player and golfer, having broken 100 many times and won multiple golf tournaments. With great pride, she also routinely outdrove her husband, Angelo, over the past decade or so. Whether in Sag Harbor or Palm Beach Gardens, there was never a shortage of family and friends surrounding Vicki and her contagious spirit. Vicki leaves behind many who loved and admired her. In addition to her husband of 58 years, Vicki is survived by her children, Daniel (Janis), Bernadette Gozdz (Edward), Angelo Jr. (Jennifer), and Michele; grandchildren, Olivia Gozdz, Caleb Ninivaggi, Anne Caroline Ninivaggi, Matthew Ninivaggi, Michael Ninivaggi, Jane Victoria Ninivaggi, Edward Gozdz, Jr., John Ninivaggi, John Berenbaum, Isabella Clara Ninivaggi; and her siblings, Margaret Mangieri, Richard, Katherine Jennings, Anthony and Robert. She also leaves behind numerous godchildren, nieces, and nephews. She is predeceased by her parents and siblings Mary Ellen Begnoche and Victor Rivera. A visitation was held February 9, 2022, at Taylor & Modeen Funeral Home in Jupiter, Florida. A visitation and Memorial Mass for Vicki will be held at St. Mary Roman Catholic Church, located at 20 Legion Place Closter, New Jersey, on February 25, 2022, with visitation commencing at 11:00 am and a Memorial Mass at 12:30 pm. Please share your thoughts and memories with Vicki’s family at the tribute page located at www.taylorandmodeen.com. In lieu of flowers, memorials can be made in Vicki’s name to the Cathedral of St. Ignatius Loyola in Palm Beach Gardens, Florida or the Church of St. Mary’s in Closter, New Jersey.

The family of Clara "Vicki" Victoria Ninivaggi created this Life Tributes page to make it easy to share your memories.