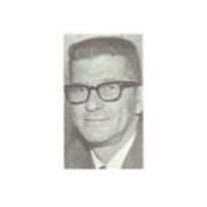 Charles N. Parisi, 90, died peacefully Wednesday, March 16, 2011 at his home in Tequesta, FL after an extended battle with cancer. He leaves his wife of 64 years, Anne E. (Antico) Parisi, his sons John Parisi and wife Ann C. Parisi of Naples, FL and Laconia, NH, Charles N. Parisi Jr. of Las Vegas, Nevada, his daughter Nancy DeMattia of Southboro, MA. as well as 4 grandchildren, Kyle and Megan Parisi and Adam and Cliff DeMattia. Born in Cambridge, MA on April 3, 1920, the son of Angelo and Gaetana(Lentini) Parisi, he was the second oldest of 7 children. He is survived by his sister Mary (Parisi) Dagostino of Waltham, MA. In his early years he would sell newspapers in Central Square in Cambridge to help pay his way through college. He graduated from Rindge Tech High School and went on to get his BS degree from The Massachusetts College of Pharmacy in 1942. Following graduation he enlisted in the military and served for 3 1/2 years in the European Theater with the US Army Medical Corp in England. After his discharge from the service, he was employed by the Interlake Chemical Company of Waltham, MA. In 1948 he founded Colab Resin Corp. of Tewksbury MA, an independent producer of phenolic resins used by the decorative laminate, paper, abrasives and plywood industries. In 1968, after many years of success, Colab was acquired by Clark Oil Corporation of Ohio who requested that he stay on as President of their US Chemical Division during the transition period. After building a house in 1959 and spending many memorable years raising their family in Andover, MA, he and his beloved wife, Anne, retired and moved to Florida in the early 70's to enjoy the beautiful weather and to play golf as both were avid enthusiasts. In retirement he continued to stay active as a real estate developer and was the general partner in several projects including the 360 acre Tewksbury Industrial Park on Rte 495 in MA and The Mall Promenade in Fort Pierce, FL. Though he had many successes and accomplishments during his lifetime, the memories that his children and grandchildren will cherish most was his strong commitment to family and his love as a dedicated and involved father. There will be a private service for the immediate family followed by interment at Riverside Memorial Park. Donations may be made to the St. Jude's Church and the Palm Beach County Hospice Orange Team. For directions & online condolences, please visit www.taylorandmodeen.com. Taylor & Modeen Funeral Home Family Owned & Operated 561-744-2030

The family of Mr. Charles N. Parisi created this Life Tributes page to make it easy to share your memories.