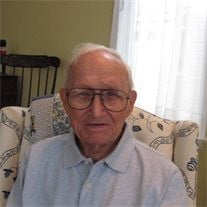 Charles Howard Henricksen, a resident of the Little Club in Tequesta, Florida, passed away from complications after a fall on Friday, February 20th in Jupiter. He was 97 years old. Charles, the son of Louis Severn Henricksen and Nora Landaas Henricksen, was born in Waterbury Connecticut on June 3, 1917. He was a graduate of Sprague School, Crosby High School and the Apprentice Program for Machinists at Scovill Manufacturing Company, all in Waterbury. On June 7, 1941, he married his beloved wife Louise (Speidel) and they spent 61 happy years together before her death in 2002. He had a long career with Scovill, retiring in 1982. Charles was a gifted athlete and participated in many sports throughout his long and healthy life. As a young man, he was an excellent gymnast, swimmer and diver; he trained and competed with the Waterbury Turners and the YMCA. He was a member of his high school football team, swim team, track team and hockey team. In later years, he bowled, played tennis and softball but golf was far and away his favorite game and he played well into his nineties. Golf is a gentlemen's game and its very rules dictate courtesy, fair play, honesty, adherence to the rules and a handicap system that levels the playing field so each player can compete fairly. He adhered both to the letter and the spirit of these rules in all areas of his life and will be remembered as a kind, fair and thoughtful man, a good friend and a gentleman. Charles is survived by his son, Mark Charles Henricksen of West Haven CT; his daughter, Hollis Henricksen Seelig (Wyckham) of Ann Arbor MI; his grandson, Eric Wolden Seelig (Alisa) of Buffalo Grove IL; his granddaughter, Sarah Elizabeth Seelig Walsh (Stephen) of Bayonne NJ; three wonderful great granddaughters: Samantha, Lauren and Anna; his sister, Norma Finnan of Waterbury CT, and several cousins, nieces and nephews. His memorial service will take place at 1:00 PM on Friday, March 6, 2015 at the First Presbyterian Church of Tequesta, 482 Tequesta Drive, Tequesta FL. An inurnment will follow at Riverside Memorial Park in Tequesta. In lieu of flowers, contributions in Charles' memory can be made to the First Presbyterian Church of Tequesta , Trust Bridge Hospice, 5300 East Avenue, West Palm Beach FL 33407 or any Hospice in your community.

Charles Howard Henricksen, a resident of the Little Club in Tequesta, Florida, passed away from complications after a fall on Friday, February 20th in Jupiter. He was 97 years old. Charles, the son of Louis Severn Henricksen and Nora Landaas... View Obituary & Service Information

The family of Charles Howard Henricksen created this Life Tributes page to make it easy to share your memories.

Charles Howard Henricksen, a resident of the Little Club in Tequesta,...