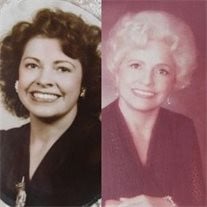 Charlene O'Neal Fetter, age 88, passed away after a recent illness on September 2, 2012. She was born Charlene Adelbert Meade on January 23, 1924, in Norton, VA, located in the southwestern mountains of Virginia, to Jeremiah C. Meade and Nancy Stallard. After her parents divorced, Charlene's mother moved her and Charlene's older brother to Detroit, Michigan where her mother soon made the decision to give up her children. While her brother moved back to Virginia, Charlene was given to a woman named Vi who owned and ran a boarding house and who became her foster mother. They loved each other dearly, and given Charlene's difficult childhood, she always referred to Vi as "the angel who saved me". One Christmas, Vi gave Charlene a baby doll and on Vi's old pedal sewing machine, Charlene taught herself how to make doll clothes. That began a lifetime of creative and talented pattern making, sewing, and costuming that joyfully served many people and organizations through the years, including her family, her churches, several dance schools, and even the Fiesta of Five Flags in Pensacola, FL. Music was also an important part of Charlene's life. With her lovely singing voice and dazzling smile, Charlene performed often as she was growing up, even singing My Alice Blue Gown on the radio. In high school, Charlene moved to Atlanta, GA to live with her father and his family for awhile, and there she met her first husband, Wilmer Benjamin O'Neal. Together Charlene and Wilmer (Benny) raised 3 children, Sharon Nancy O'Neal, Michael Chadwick O'Neal, and Kathleen Estelle O'Neal (now Osvath). As an Air Force family they traveled extensively, and had the good fortune to be stationed in Bermuda for 3 wonderful years. In Bermuda, Charlene took art lessons and her natural artistic talent for figure drawing and watercolor painting emerged. After the family returned to the U.S., Charlene learned shorthand and began a happy career as an elementary school secretary in Orlando, FL and Hampton, VA. Soon after Wilmer retired from the Air Force though, he suffered a heart attack and the family relocated to Pensacola, FL. Charlene then spent 6 years in the position of executive secretary to the President of Pensacola Junior College. Wilmer died at the young age of 51. As a beautiful, youthful, 44-year-old widow, Charlene needed to continue to work, but decided to change her career to insurance sales. She excelled at everything she did, so she prospered and created an interesting new life for herself, eventually moving to south Florida. In 1978, Charlene married the love of her life, Glenn C. Fetter, a successful West Palm Beach businessman, to whom she was happily married for 33 years. Glenn loved her dearly and was obviously smitten by Charlene's beauty, especially her spectacular smile and fun-loving nature. They enjoyed life to the fullest and were devoted to all of their children, grandchildren, and great-grandchildren. They loved to go dancing, and when they were on the dance floor, the other dancers would often sit down just to watch the charming pair strut their stuff. Glenn and Charlene also loved playing golf and Charlene actually joined the "hole in 1" club while they were golfing in North Carolina. Since then, Charlene has been a frequent winner of her Jonathan's Landing putting club competitions. Unfortunately, Glenn predeceased Charlene in July, 2011, and although Charlene has been well loved and cared for by her children and grandchildren (particularly her primary caregiver and daughter, Sharon), life has never been the same without the love of her life by her side. Glenn and Charlene fitted together like two gloves, working hand in hand in Glenn's business, enjoying family gatherings and church activities, and traveling to wonderful destinations throughout the world. We can only imagine their joyful reunion now. We also trust that Charlene's lifelong kindness and generosity to others has been well rewarded by the God she loved and trusted so faithfully throughout her lifetime. Charlene is survived by her 5 children who will miss her more than words can express: Sharon O'Neal of Atlanta, GA, Michael O'Neal and his wife, Patricia, of Pensacola, FL, Kathleen (Kathy) Osvath and her husband, Gabor, of Charlottesville, VA, Alan Fetter and his wife, Loyce, of Jupiter, FL, and Carole Fetter of Atlanta, GA. Grandchildren include Michael Mollick of Atlanta, GA, Kelli O'Neal of Atlanta, GA, Jon O'Neal of Austin, Texas, and Alexandra Osvath of Besançon, France. Great grandchildren include Tiffany Joseph, Jesse Puckett, Carissa Mollick, Andrea Mollick, Nathan Mollick, and Una Alexander. Charlene is also survived by a sister, Barbara Barker, of Atlanta, GA, and dear friends Irene and Jerry Colonna, and Goldie Bertchinger. A private memorial will be held at a later date. Condolences may be offered on the website of Taylor & Modeen Funeral Home, Jupiter, FL: www.TaylorandModeen.com. The family also requests that in lieu of flowers, a donation be made to either Hospice of Palm Beach County (hpbc.com) or Busch Wildlife Sanctuary in Jupiter (www.buschwildlife.com).

Charlene O'Neal Fetter, age 88, passed away after a recent illness on September 2, 2012. She was born Charlene Adelbert Meade on January 23, 1924, in Norton, VA, located in the southwestern mountains of Virginia, to Jeremiah C. Meade and Nancy... View Obituary & Service Information

The family of Charlene O'Neal Fetter created this Life Tributes page to make it easy to share your memories.