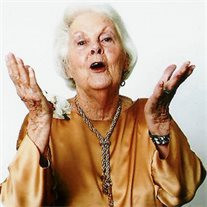 Cecilia Hamilton Plummer died peacefully Tuesday evening with members of her family beside her. Born on December 12, 1920, her passing on October 5 follows a vital life full of affection, enjoyment, and conviction shared with her large and cherished community of family and friends. Cecelia Plummer devoted most of her career to making a home for her dear husband Arthur, who predeceased her in 1992, and six sons. After marrying Arthur in Maryland, his career carried her and a growing family to California, during three different transfers for Pratt & Whitney, as well as to Ohio and Washington before finally settling in 1970 in Jupiter. She counted 13 cycles of packing and unpacking the Plummer home before reaching the community where she enjoyed 40 uninterrupted years filled with family, friends and a life of voluntary service. As much in her conversation suggested, she had a vivid memory for friends and the ties between generations of family. She recalled a happy childhood peppered with memories of how the Depression affected George Hamilton, a civil engineer and entrepreneur in southern Maryland’s Leonardtown, where she grew up in a devout Catholic family with 8 siblings under the caring eye of her mother Emma. She graduated from the Georgetown University School of Nursing, and as a registered nurse worked for the Maryland Department of Public Health. That training also served her well in caring for a family of six boys through many stages of change. From that education, she also seemed to gain an eager willingness to nurse positive results in all her pursuits. As a resident of Jupiter, she built a home with Arthur in Jupiter Inlet Colony and became a leader in her community. She served as President of the JIC Garden Club. She was chairperson for the 25th Anniversary Celebration of Jupiter Inlet Colony. She was elected to Town Council. She was an active member of the Lighthouse Gallery where she founded the museum gift store and, as a buyer in the 1980s, traveled to Beijing. She contributed tirelessly to the North Palm Beach County American Cancer Society, where she was honored as Volunteer of the Year in 1988. She also was dedicated to creating educational opportunities for women through her work with the PEO sorority. A devout parishioner, she worshipped during all of her life in Jupiter at Saint Jude's Catholic Church. Her favorite dance and expression of exuberance was the Charleston, whose steps she demonstrated at countless parties. A prudent investor, she and friends formed the Twenty-Twenty Investment Club, which became a rewarding association for several decades. A regular and accomplished bridge player for more than 50 years, around the table as in life, she learned how to recognize the potential of the play in her hand while creating friends in all of her pursuits. Remembered for her graciousness, good-heartedness, and honest opinions, she easily turned away from her own complaints and focused on what she preferred to talk about, which was most often in later years her 6 sons and 5 grandchildren. Cecilia Plummer is survived by her sons and their spouses, William and Susan Plummer of Aspen, CO, Joseph Plummer of Pittsburgh, Dana Plummer of Santa Monica, Sam and Jill Plummer of Jupiter, Michael Plummer and Gail Butler of Tallahassee and Derek Plummer of St. Paul, MN; her grandchildren, Carah Mancuso of New York, Dora Magovern of Pittsburgh, Will Plummer of Gainesville, and Olivia and Abigail Plummer of Aspen; and her sister Patricia Collins of Oakton, Va., and brother David Hamilton of San Anselmo, CA. A Service of Prayer and remembrance will take place on Friday, Oct. 15, between 5 pm and 7 pm at Taylor & Modeen Funeral Home, 250 Center St., Jupiter, FL. A Funeral Mass will be celebrated on Saturday, Oct. 16, between 11:30 am and 1 pm at St. Jude's Catholic Church, 204 North U.S. Highway 1, Tequesta, followed by interment at Riverside Memorial Park to be followed by a reception at Mangrove Bay Residence Hall. The family requests that any remembrances in her honor be made to PEOinternational org, Hospice of Palm Beach County, Lighthouse Center for the Arts, or Palm Beach County American Cancer Society.

Cecilia Hamilton Plummer died peacefully Tuesday evening with members of her family beside her. Born on December 12, 1920, her passing on October 5 follows a vital life full of affection, enjoyment, and conviction shared with her large and... View Obituary & Service Information

The family of Mrs. Cecelia H. Plummer created this Life Tributes page to make it easy to share your memories.