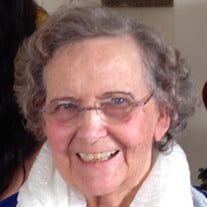 Catherine Pfeiffer “Kay” Miklos, 85, passed away peacefully on Tuesday morning, March 6, 2018 in the care of hospice at Lakeside Health Center in West Palm Beach, FL. Kay was born in Charlotte, NC and raised primarily in Cleveland, OH. She is predeceased by her husband Bernard George Miklos, MD since 2009. She moved to Mangrove Bay in Jupiter at his passing and lived there until March 2017. She will be deeply missed by her daughter Rebecca Ann Miklos “Becky” and her son David Bernard (Shalina Mahajan, Ph.D.) Miklos, M.D. Ph.D. She had 4 grandchildren: Maya, Sarah, Arjun and Eva. Born Catherine Winter Pfeiffer in 1933 in Charlotte, NC, Kay was the 4th of 6 children born to Ralph Aloysius Pfeiffer and Rebecca Catherine Winter. She attained a degree in nursing from Georgetown University, and moved to California where she worked for the American Red Cross. When she returned to Cleveland she worked at the Cleveland Clinic where she met her husband. The couple married in 1962 and settled in White Oak outside Pittsburgh, PA. In 2000 they moved to Jupiter. A devout Catholic, Kay was a Eucharistic Minister at her Church in Pennsylvania, St. Angela Merici, and helped out extensively at the Catholic grade school and high school. She was also a Brownie Troup leader, science project mentor, and board member of the College Club. Kay enjoyed making ceramics and had her own kiln in the basement of her home in White Oak. She also loved making pasta, baklava, hard tack candy and molded butter mints. Kay was famous for her hand-woven rugs made from old sheets and fabric discards. A funeral Mass of the Resurrection will be held on Monday, March 12 at 10:30am at St. Peter Catholic Church in Jupiter, FL followed by a reception in the Parish Hall. She will be interred at Riverside Memorial Park alongside her husband. In lieu of flowers, donations are suggested to this non-profit run by Kay’s niece: http://www.bouncechildrensfoundation.org/

The family of Catherine Pfeiffer Miklos created this Life Tributes page to make it easy to share your memories.