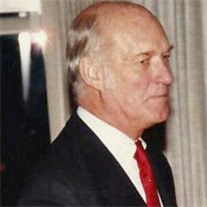 Caspar C. Schneider, Jr. of Palm Beach Gardens, Florida and formerly of Todt Hill, Staten Island, New York, died on Thursday, June 12th after a short illness. He was 90. Born on Staten Island to Caspar and Edith Schneider, Caspar attended public elementary schools and graduated from Curtis High School. He studied chemical engineering at the Massachusetts Institute of Technology before his studies were interrupted by service during WWII. After the war Caspar returned to MIT where he completed his bachelor's degree. Following graduation, he took a position as a patent agent with the firm of Howson and Howson. At the same time he attended Fordham University School of Law. His studies were again interrupted by military service during the Korean Conflict. Caspar completed his legal studies and was admitted to the Bar of the State of New York in 1953. In the mid-1960s Caspar joined the distinguished patent firm of Davis Hoxie Faithfull and Hapgood where he represented clients from around the world in intellectual property law matters. Caspar was an active member of the American Intellectual Property Law Association and the New York Intellectual Property Law Association Serving as Secretary of the latter organization from 1970 to 1973. In 1947, Caspar married his high school sweetheart, Elizabeth Manske who predeceased her husband. The Newlyweds initially lived on the East Side of Manhattan but later moved back to Staten Island to raise their family. An avid sailor and tennis player, Caspar also enjoyed traveling, making two excursions around the world, and visiting Europe many times, including an extended stay in London, with a flat in Mayfair. In 2004 the Schneiders moved to Devonshire at PGA National, a retirement community in Palm Beach Gardens. While at Devonshire Caspar was active in the residents' association serving on its board for many years including two terms as board president. Caspar is survived by his three sons, Paul A. of Staten Island, NY, Karl F. of Arlington, VA and John E. of Plano, TX; and seven grandchildren. A Memorial Mass will be celebrated 10 A.M., Thursday, June 26, 2014 at St. Patrick Catholic Church in Palm Beach Gardens. Interment at Moravian Cemetery in Staten Island will be private. In place of flowers, contributions may be made to Catholic Charities or the Salvation Army.

The family of Caspar C. Schneider, Jr. created this Life Tributes page to make it easy to share your memories.