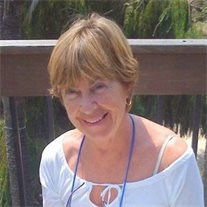 CAROL ANN SNYDER Carol Snyder passed peacefully, surrounded by her loving family in her Tequesta home, on August 2 at the age of 74. She had been stricken with a rare lung disease in the fulness of a happy, vibrant life. A memorial service will be held at 4 pm Sunday, August 7 at the First Presbyterian Church of Tequesta. She was born Carol Ann Woodruff Snead December 18, 1936 in Evanston, IL to Thornton and Julia Snead. After graduating from Evanston Township High School in 1954, she attended the University of Wisconsin/Madison and earned her B.S. degree from the National College of Education in 1958. After a brief career as a grade school teacher, she married David Owens and they raised four children in Palo Alto, CA and Lake Forest, IL. Following his death she proved her resiliency by serving as a local news reporter and dietary counselor. She went to clown school and became known as “Scribbles” at local events. In 1993 she moved to Scottsdale, AZ and became a travel agent. In 2008 Carol moved to Tequesta to marry author-historian Jim Snyder, who had been a “first love” back in their home town of Evanston, IL. Carol spread sunshine and goodwill wherever she went. She inspired many through her active roles in the Presbyterian Church of Lake Forest, IL, the Unity Church of Phoenix, AZ and, most recently, the First Presbyterian Church of Tequesta. In Tequesta she quickly became active as a Deacon, choir member and editor of the church newsletter. Her surviving family are: son David L. Owens and wife Patricia M. of Lake Barrington Shores, IL., son Jeffrey T. Owens of Minneapolis, MN; and son Michael W. Owens of Phoenix, AZ and his daughter Aurora; daughter Jennifer O'Brien of Laguna Nigel, CA, her husband Scott and sons Scott, Jr., Nicholas and Jack. Carol's two sisters are Mary Mayer and Susan Clardy, both of Portland, OR. Carol, Mom, Grandma, lived a spiritual life guided by her heart along the sweet and simple path of “light, love and laughter.” In lieu of flowers, it is suggested that donations be made to one of the following: First Presbyterian Church of Tequesta – Music Memorial Fund, 482 Tequesta Drive, Tequesta, FL 33469, 561-746-5161; or Unity of Phoenix, 1500 East Greenway Parkway, Phoenix, AZ 85022, Attn: Carol Snyder Memorial Fund. For directions & online condolences, please visit www.taylorandmodeen.com. Taylor & Modeen Funeral Home Family Owned & Operated 561-744-2030

CAROL ANN SNYDER Carol Snyder passed peacefully, surrounded by her loving family in her Tequesta home, on August 2 at the age of 74. She had been stricken with a rare lung disease in the fulness of a happy, vibrant life. A memorial service... View Obituary & Service Information

The family of Carol Ann Snyder created this Life Tributes page to make it easy to share your memories.