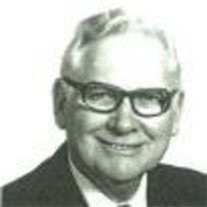 Carlton Dunlap Stoddard 97, of Tequesta, FL died Tuesday, May 31, 2011 in the Hospice Unit of Palm Beach Gardens Medical Center. Born on July 23, 1913 in Jesup, Iowa, the son of Guy C. and Beulah Dunlap Stoddard. He married Alberta Gladys Hoppe September 5, 1936 in Cedar Rapids. Mr. Stoddard and wife Alberta received Bachelor of Science Degrees in Journalism for Iowa State College, now Iowa State University, in 1935. While in college, he was Editor of the Iowa Agriculturist, the college agricultural magazine, received the Sigma Delta Chi gold watch award as "best campus editor", served as Business Manager for the Iowa State Student, the college newspaper, was awarded the Danforth Fellowship as "outstanding Junior student of agriculture with highest grade point average", and received the Cardinal Key award for college leadership. He also served as summer editor of the Citizens Herald, Jesup, Iowa. Mr. Stoddard was Mayor of Tequesta, FL from 1983 to 1988 and Vice Mayor from 1980 to 1983. He also served as a member of the Village Council from 1980 to 1988. He served as chairman of the Tequesta Downtown Development Task Force, was a member of both the Executive Board for the Palm Beach County Municipal League and the Tequesta Community Appearance Board. In addition, he was a Tequesta representative to the Loxahatchee Council of Governments and the Palm Beach County Beaches & Shores Council. Mr. Stoddard organized a public campaign for the Tequesta Village Green fountain and park landscaping, and originated the annual Christmas Carol Chorale and the community Christmas tree at the Village Park Green. Carlton Stoddard served as Administrative Board member for the First United Methodist Church of Jupiter-Tequesta and was President, Chaplain, and Program Director of the church Open Fellowship. He was a member of the Jupiter-Tequesta Kiwanis Club, where he originated the "Motor Aid" transportation program for the Jupiter Medical Center, to which the Kiwanis Club donated a motor coach. He served as Community Services chairman from 1985 to 1988 and twice received the Kiwanian of the Year award. he also organized the Wisconsin advertising and public relations campaign for President Dwight Eisenhower. Mr. Stoddard was President and Editor of FarmCom, Inc., and agricultural publisher, in Milwaukee, WI and Tequesta, FL from 1973 to 1983. He was Vice President and Agricultural Director at Cramer-Krasselt, Inc., in Milwaukee from 1963 to 1973. Mr. Stoddard was Senior Vice President, Executive Chairman and Agricultural Director of Gittins Associates, Inc. advertising agency in Milwaukee, from 1937 to 1963. He was also the author of over 200 color illustrated feature articles and agriculultural publications, many of which were published world wide. In addition, Mr. Stoddard was the author of the biographical book, "Turning Back the Old Farm Clock" --The Stoddard Story, which was adopted as a reference for journalism students at Iowa State University in 1996. He introduced the first soil implant inoculation of soybeans and peanuts, enabling legumes to draw nitrogen from the air for Nitragin Co., Inc., in 1974. Mr. Stoddard served as the Curriculum and Building Chairman of the Elmbrook Consolidated School District in Brookfield, WI between 1969 and 1973. From 1937 to 1963, he was an integral part of the national and international public relations for Allis-Chalmers, introducing the first air-tired tractor, family farm combine harvester, round baler and field forage harvester. He was involved in many philanthropic activities in earlier years. He was the Southeastern Wisconsin Chairman of the March of Dimes in the 1970's. The organization awarded him the Gold Hypodermic Needle Plaque for his leadership in the Wisconsin rubella vaccination campaign against birth defects. As a result of this campaign 600,000 children were vaccinated. This work was done under the direction of Dr. Jonas Salk. Mr. Stoddard was active in the United Methodist Church in Elm Grove, WI in the 1960's. He was Membership and Music Chairman, and was on the building committee at the church. In 1961, he was part of the organizing committee, and lent his expertise to public relations and advertising for the World Food Exposition. In this endeavor, he worked with Dr. Wernher von Braun and the University of Wisconsin Board of Regents. He served as President of the Milwaukee Farmers Club from 1957 to 1959. In addition, he served as President of Wisconsin Friends of the Land from 1958 to 1960. Mr. Stoddard was preceded in death by his wife, Alberta Hoppe Stoddard. Survivors include his three sons and one daughter; Allan Michael Stoddard and his wife, Marylou of Williamsburg, VA, Steven Carlton Stoddard, MD and his wife, Sally Dahir of Highland, WI, Randall Roger Stoddard MD and his wife, Sarah of Hawi, HI, and Sheralyn Millang and her husband Larry of Ankeny, IA; eleven grandchildren and eleven great grandchildren. A Memorial Service will be held at 10 AM, Saturday, June 4, 2011 at the First United Methodist Church of Jupiter/Tequesta, 815 Indiantown Rd., Jupiter, FL. Inurnment will be in Cedar Crest Memorial Park Cemetery in Jesup. Memorials may be directed to the First Methodist Church or the March of Dimes. For directions and online condolences, please visit www.taylorandmodeen.com. Taylor & Modeen Funeral Home Family Owned & Operated (561) 744-2030

The family of Carlton Dunlalp Stoddard created this Life Tributes page to make it easy to share your memories.