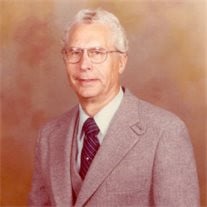 Buddy "Budd" Leland Hansen, 95, of Homosassa, Florida passed away on March 16, 2015. Budd was born on December 12, 1919 in Upland, Nebraska to Laura Marie (Steinke) and Martin Robert Hansen. He was raised on a farm in southern Nebraska during one of the most challenging periods for farmers. The 1930s, with the Great Depression, drought, the Dust Bowl, failing crops and declining prices was hardly an inducement to a career in farming. Following graduation from Upland High School, Nebraska in 1937, Budd attended the University of Nebraska under a Regents Scholarship fora year. Then, after toiling on the farm for nearly a year with only $130 to show for it, he relocated to Portland, Oregon in 1939. In September 1940 Budd enlisted in the 41st National Guard Division. Following the attack at Pearl Harbor on December 7, 1941 the 41st Infantry Division was mobilized and transferred to Ft. Dix, New Jersey and left the Brooklyn Navy Yard in March 1942 bound for Australia via the Panama Canal. After Officer's Training School in Australia, Budd was awarded a field promotion from Staff Sergeant to 2nd Lieutenant. For 36 months, Budd proudly served his country primarily as a Communications officer and participated in the Papuan, New Guinea, Bismark Archipelago, and Philippine military campaigns. He returned stateside in 1945 and was honorably discharged as a First Lieutenant in December 1945. Budd and his future wife, Helen (an Army Nurse) met in Australia during WW II. In fact, unbeknownst to them, they were on the same ship (Santa Paula) steaming from the Brooklyn Navy Yard to Australia in 1942. When they were both stateside, but still in the Army, Budd and Helen married on April 9, 1945 at the Little Church Around the Corner in Manhattan, New York. They travelled west to Corvallis, Oregon where Budd graduated from Oregon State University in 1949 with a Bachelor of Science Degree in Mechanical Engineering. The family headed back east and Budd landed a job as an engineer for Ternstedt Division of General Motors in West Trenton, New Jersey which was the start of a successful career with General Motors. He obtained a Professional Engineering License from the State of New Jersey. In 1963 he transferred to GM Headquarters in Detroit and later to Pontiac Motors in Pontiac, Michigan. In 1979, Budd and Helen retired and relocated to Sugarmill Woods in Homosassa, Florida. For many years they enjoyed golfing, socializing, and traveling. Those early retirement years were full of festivities with family and their new found Florida friends. His sense of humor always came to the forefront in these social gatherings. He became active in the community and for more than a decade was the major representative and driving force of the community in the quest to secure fair and equitable water and sewer rates which involved numerous rate cases before the Florida Public Service Commission. Budd lived a full and productive life, was well liked and respected by all who knew him, and was always ready to lend a hand when friends or family needed assistance. Wherever he lived, Budd was active in the Church beginning with being named the Sunday School Superintendent for the United Brethren Church in Upland, Nebraska when only a junior in high school. Budd is survived by his wife of 69 years, Helen Frances (Sprague) Hansen of Warwick, New York.He is also survived by son Eric Brian of Mendon, Michigan; son David Alan and his wife Allison Paladinoof Tequesta, Florida; granddaughter Kristin Marie (Hansen) Allen and her husband Richard Freeman Allen of Golden, Colorado; grandsons Jason James Hansen and his wife Carrie Ann Zollner of Caledonia, Michigan and Kent Alan Hansen and his wife Kate Armstrong, of Northfield, Illinois; Great granddaughters Jordyn Brianna and Skylar Faith Allen of Golden, Colorado and Stephanie and Lorelei Hansen of Northfield, Illinois. He was preceded in death by his siblings: Ethel (Hansen) Nixon, Raymond Edward Hansen, Lawrence Sydney Hansen, and Lowell Mart Hansen. Budd, as you frequently opined in a toast to the crowd, "You were a gentleman, a scholar, and a judge of good whiskey." You will be missed by all who knew you. Rest in peace. On Friday, April 10th, visitation will be from 10:00 to 11:00 with a Celebration of Life Service at 11:00 a.m., at the Taylor & Modeen Funeral Home, 250 Center Street, Jupiter, FL 33458. Burial will commence at 2:00 at the Veteran's South Florida National Cemetery in Lake Worth, Florida. Contributions in lieu of flowers may be mailed to the First United Methodist Church, 8831 W. Bradshaw St., Homosassa, FL 34448.

Buddy "Budd" Leland Hansen, 95, of Homosassa, Florida passed away on March 16, 2015. Budd was born on December 12, 1919 in Upland, Nebraska to Laura Marie (Steinke) and Martin Robert Hansen. He was raised on a farm in southern Nebraska during... View Obituary & Service Information

The family of Buddy Leland Hansen created this Life Tributes page to make it easy to share your memories.