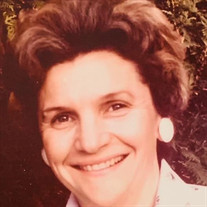 BERNADETTE RACEK Bernadette Racek, a resident of Jupiter, Florida since 1988, passed away at Courtyard Gardens on May 17, 2021 at the age of 88. She was born Bernadette Agnes Bulger in Brooklyn, New York in 1932 and graduated from St. Brendan’s High School in 1950. She was employed in the personnel department of National City Bank on Wall Street until her marriage in 1955 to Timothy James Racek, who was then on active duty as a U.S. Navy officer in California. She returned with her husband to the New York area in 1958 where she raised her family, served as a Girl Scout leader, supported her church through membership in the Rosary/Altar Society and Charismatic groups, and served as a yard mother at St. Leo’s School in Lincroft, New Jersey. She also had a home for 30 years in Seaside Park, New Jersey. Bernadette was an accomplished home decorator, furniture restorer, and crafter. She excelled at making the holidays special through her attention to detail in all that she touched. Bernadette loved singing in the church choir and on occasion, after much encouragement, would entertain her family with an Irish ballad. Her other great joys included reading English murder mysteries and watching the True Crime Channel. Bernadette is survived by Tim, her husband of sixty-six years, and her five children: Mary Ethel Jacobs and her husband Donald, Timothy James Racek Jr. and his wife Nancy, Vivian Kate Shortell and her husband Thomas, Brian Thorne Racek and his wife Jennie, and Sara Jean Duffin and her husband John. She was predeceased by her infant daughter Catherine, her sisters Mary McCaig and Vivian Bulger, brothers James, Michael and Richard Bulger, and her parents James and Ethel Bulger, both of whom were born in Newfoundland. She is also survived by her eighteen grandchildren: Thomas James, Timothy Daniel, Brian Thorne Jr., Kristen Mary, Timothy James III, Stephen Luke, Sara Helene, Katherine Aleith, Anna Vivian, Jessica Kate, Matthew James, Fiona Bernadette, Maeve Cornelia, Gillian Margaret, Grace Lilian, John Joseph, Michael Sean, and Timothy Edward; four great-granddaughters: Erin, Nora, Charlotte, and Allison; and many other extended family members. A private memorial Mass will be celebrated at 11:00 am on May 21 at St. Peter Catholic Church in Jupiter, Florida. She will be laid to rest at the national military cemetery in Lake Worth, Florida.

BERNADETTE RACEK Bernadette Racek, a resident of Jupiter, Florida since 1988, passed away at Courtyard Gardens on May 17, 2021 at the age of 88. She was born Bernadette Agnes Bulger in Brooklyn, New York in 1932 and graduated from St. Brendan&#8217;s... View Obituary & Service Information

The family of Bernadette Racek created this Life Tributes page to make it easy to share your memories.