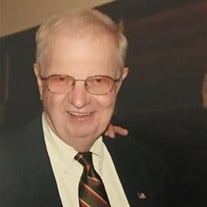 . Benjamin J. Klemanowicz Jr. March 26, 1935 – November 11, 2019 Benjamin J. Klemanowicz Jr. lived a life filled with love, friendship, hard work, and dignity. Ben passed on November 11, 2019 at age 84, surrounded by family and friends after battling cancer. He leaves his wife of 61 years, Constance Mary, his daughter Kathryn Jean and son-in-law Thomas John O’Hara, his favorite grandchildren, Kathryn Lee and Thomas John Jr., and many close friends. Raised in Hempstead, New York, Ben embraced hard work and big dreams from the start. At age 12 he began saving for college, setting pins at the local bowling alley, delivering newspapers and eventually finding a job where he thrived, working as a caddy at Rockville Links Club. His mother Jean, and father Benjamin John Sr., first generation Polish immigrants, saved his young earnings so that after graduating from Hempstead High School in 1953, he could attend Villanova University where he received his B.A in 1957. During his freshman year Ben fell in love with a local suburban-Philadelphia girl, Constance Mary (Kline) and they married a year after his college graduation in 1958. He served his country in the US Army Counter Intelligence Corps and worked for IBM while attending law school at night. Ben achieved his J.D. from New York Law in 1962 and was accepted to the New York State Bar. He established his law firm in Garden City, Long Island where he represented numerous financial institutions, major corporations and individual clients. Ben was the first lawyer in New York to create a prepaid legal contract with a labor union providing legal services to the members of Local 138 of the International Union of Operating Engineers and Local 282 of the International Brotherhood of Teamsters. Ben took great pride in the law firm which he founded, but cherished the friends he made through his practice even more. He was a member of the Nassau County Bar Association and the New York State Bar Association for 57 years. His family would say he never “officially” retired from law. As an avid golfer, Ben was college team captain at Villanova and went on to win numerous club tournaments over his lifetime. He was a longtime member of Jupiter Hills Golf Club, Jonathan’s Landing Golf Club in Florida, and Garden City Golf Club and Garden City Country Club in New York. But the true measure of his success as a golfer were the enduring friendships fostered both on and off the course. Ben was firm in his beliefs and a generous philanthropist supporting many worthy causes including Founder participation at Jupiter Medical Center of Florida, Boys and Girls Club of South Queens, New York, Villanova University President’s Club, NYU Winthrop Hospital, St Jude and St Joseph Catholic Churches, and many other worthy causes. Ben had many other passions including playing cards, horse racing, and other sports. Most importantly he loved spending time with his family and friends. His pride and joy were his wife, daughter, son-in-law and grandchildren. Whether it was offering advice as a life coach, celebrating special occasions, or providing tips on a golf swing, Ben was the best husband, father, father-in-law, grandfather and friend ever. He was truly an honorable man exemplifying the principles of honesty, generosity and hard work who valued his family and friends above all his accomplishments. He will be missed dearly. A private service will be held in New York with burial at Cemetery of the Holy Rood in Westbury. Ben is survived by his immediate family, and his sister, Barbara, her daughter Jennifer, a nephew William Wilkinson, his wife Roma, a niece Jeannie (Wilkinson) Scheidel, her husband David, andtheir families. Ben’s family would like to express their gratitude to Dr. Mark Corry and all the doctors, nurses and staff of Jupiter Medical Center and Trustbridge for their professional and compassionate care. In lieu of flowers, please consider a donation to the Jupiter Medical Center Foundation, 1210 South Old Dixie Highway, Jupiter, Florida 33458.

The family of Benjamin J. Klemanowicz Jr. created this Life Tributes page to make it easy to share your memories.