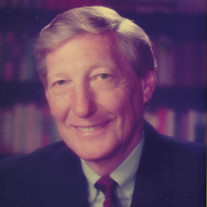 On Saturday, August 24th, 2019, Barton Love passed away peacefully at his home in Hobe Sound, Florida at the age of 90. He was a loving husband to Joan (neé Palickee) of 67 years and father to five children; Kary (Patricia), Vicki, Christopher (Kerry), Laura, and Kenneth (Stephanie). He was also the proud grandfather of 21 grandchildren and 11 great-grandchildren. Bart was born on April 13th, 1929 in Dwight, Illinois. His parents, Kennetha (neé Emig) and Fred Love raised him in the South Shore neighborhood of Chicago along with two sisters Posy (Krehbiel) and Elizabeth (Scott). Bart played football for Hirsch High School, where he met his wife, Joan, whom was in the stands cheering for the rival team. They have been inseparable ever since. Bart was drafted into the Korean War while studying on a scholarship at the Art Institute of Chicago. He was proud to serve his country and upon his return he married Joan. They moved to Arlington Heights, IL, where they started a family and made many lifelong friends. They eventually settled in Lake Forest, IL with homes in Wisconsin and Florida. Bart was able to use his artistic skills and his love of business to work in graphics arts. He started at Schultz Litho and eventually went on to create his own successful printing company Web Offset Inc., which became E&D Web and Master Graphics, LLC. He built businesses with integrity, hard work and honesty. He cared about his employees and would always ask if “the printing presses were running” until the end of his life. Anyone who knew Bart knows that golf was the other love of his life. He started playing at an early age and continued until the end of his life. He valued his time on the course where he made lifelong friendships and nothing made him happier than spending the day at the links with friends, his children or grandchildren. Throughout his life, he was a member of several golf clubs and was president of Bob O’ Link in 1987 and 1988. He also belonged to Knollwood Club in Lake Forest, Big Foot Country Club, and had a particular love for Lake Geneva Country Club of Wisconsin where he spent his summers. During the winter months, The Medalist and Hobe Sound Golf Club were second homes to him. Bart had a twinkle in his eye. He cared deeply about his work and his family. He loved the dogs that came into his life, designing homes that he would build, and winter skiing in Colorado. Many people did not know that he continued to paint until the end of his life. He will be deeply missed by his family, countless friends, former employees, and anyone that had the good fortune to be part of his life. Bart was a role model on how to live a long life and how to live it well. He will always be remembered as a gentleman. A Celebration of Life will take place in Florida this winter. In lieu of flowers and to celebrate Bart, donations may be made to: Treasure Coast Hospice Foundation, 1201 SE Indian Street, Stuart, Florida 34997 (http://www.treasurehealth.org) “Giving Page.”

On Saturday, August 24th, 2019, Barton Love passed away peacefully at his home in Hobe Sound, Florida at the age of 90. He was a loving husband to Joan (neé Palickee) of 67 years and father to five children; Kary (Patricia), Vicki, Christopher... View Obituary & Service Information

The family of Barton Love created this Life Tributes page to make it easy to share your memories.