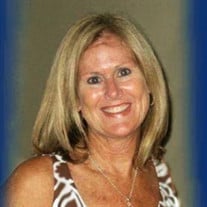 The sun shined brighter in Heaven on the afternoon of September 14, 2018 as Barbara Jean Pacetti Stivers of Tequesta, FL transitioned to her new and everlasting life while being comforted by her husband, family and friends and her closest confidant, Oreo. Barbara was born in Murfreesboro, TN on August 10, 1960. She is survived by her husband, George Stivers, Jr., of Tequesta, FL, her Mother, Evelyn Giannini Rivers of Melbourne, Fl, brother Richard Rivers, Jr., of Stoneville, NC, sister Linda and husband Chris Webster of Suwanee, GA, brother Bob and wife Nan Rivers of Debary, Fl, brother John and wife Robin Rivers of Melbourne, FL, brother Frank and wife Tania of West Melbourne, FL, brother Bill and wife Barbara Rivers of Eden, NC, sister Lauretta Rivers of Melbourne, FL and her step daughters Danielle Agudello of Royal Palm Beach and Ashley Stivers of Tampa. She is also survived by 13 nieces and nephews and by loving in-laws, numerous lifelong friends and Oreo. Barbara is pre-deceased by her father, Richard Bernard Rivers, Sr. And her brother, Michael Rivers. After graduating from Eau Gaille, High School in Melbourne, FL in 1978, Barbara began an extensive career in the mortgage industry. Pam Racz, manager at Stockton Whatley & Davin Mortgage company (SWD) in Melbourne, FL, recognized Barbara’s talents early on and hired her as the main receptionist for the company. It was from that point forward that Barbara realized that the mortgage business fit her career path in so many ways. After several years at SWD, she was recruited by Centex as a loan officer and moved to Texas. It was there that her love of country music ignited! She adapted to the mortgage industry very well. After much success and wonderful times in Texas, she returned to Florida in 2001 to join KHAM as an Account Manager. Several years later she served for many years as Executive Assistant to Dan Klinger, President of KHAM. She most recently held the position of Government Insuring Administrator. Barbara held multiple NMLS licenses in the mortgage industry. Barbara was very fond of all of her colleagues at KHAM. One person who had a profound effect on her professional career and her life was Dan Klinger. Barbara and George met in January 2011. She expressed to George after meeting him that she felt her life was finally aligned. Four years after they met, she shared with him that she knew she wanted to marry him after their very first phone call. George loved Barbara deeply. Their love for each other was unconditional. Their lives together were enriched and fulfilling. Barbara was right there to give him guidance when needed — telling him how to drive, and in her opinion, felt that instructing him was a necessary activity. She loved her life together with George. Barbara loved to exercise, especially taking sunrise walks over Melbourne Causeway and spending time at the beach at Tuckaway Shores in Indialantic and Jupiter Beach. Being out on the boat with George and sharing sunrises and sunsets together was one of her favorite things to do. She loved animals, swimming in her pool, cycling, and numerous outside activities. She enjoyed stopping and talking with neighbors while on walks with Oreo. Barbara was also fascinated by the Stock Market, following it regularly. Four years ago, as the challenges of her illness arrived, she held George’s hand tighter. It was the beginning of a journey that they would walk every step of the way together. George and everyone who knew Barbara, knew that if anyone was going to kick “Cancer’s ass” with great courage, bravery, inspiration, fight and faith, it was Barbara! She exercised, juiced, researched, fought and prayed thru every diagnosis, every surgery, every treatment, every piece of bad news. She did not complain. She was so intelligent, and with George, asked the difficult questions. She did everything in the inner depths of her heart and soul to conquer. And she did it with the determination of a prize fighter and the grace of a ballerina…all with George in her corner holding her hand tighter and tighter loving her more each day. She had some great sayings in life, one of her favorite’s was “Wine is Fine Liquor’s Quicker”! Some people would say to her jokingly, “Oh I’m getting old”, when feeling their growing pains.” She would say to them, “Be thankful for that”! She inspired us all to do our best in life, to love, to laugh, to be grateful. She loved George, her family, her friends and her Oreo! She will always be missed and always be remembered as a person who gave God and everyone in her life her best! Barbara loved orchids. George has asked that anyone wishing to send flowers to consider sending an orchid. He will nurture and cherish them in her memory. The family will receive friends from 1:30PM to 3:30PM on Saturday, September 22, 2018, at Taylor & Modeen Funeral Home, 250 Center Street, Jupiter, FL. A Celebration of Life will be held at 3:30pm, Saturday September 22, at Taylor & Modeen Funeral Home, 250 Center Street, Jupiter, FL.

The sun shined brighter in Heaven on the afternoon of September 14, 2018 as Barbara Jean Pacetti Stivers of Tequesta, FL transitioned to her new and everlasting life while being comforted by her husband, family and friends and her closest confidant,... View Obituary & Service Information

The family of Barbara Jean Pacetti Stivers created this Life Tributes page to make it easy to share your memories.

The sun shined brighter in Heaven on the afternoon of September...