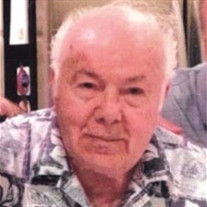 On behalf of the Romano family, it is with deep sorrow, we announce the passing of our beloved Father – Grandfather, Husband (Recently Widowed), Brother, Uncle and so much more! ANTHONY ROMANO, October 04, 1929 - July 26, 2019. Anthony’s parents, Joseph Romano and Lucia Calavicchi, originally from Italy, met in New York. There they married and gave birth to Anthony Romano on October 04, 1929. Anthony passed away Friday evening, July 26, 2019, in his Palm Beach Gardens home, just 24-hours after all his five children left from their visit. He expressed how happy he was to see everybody together during that time - Gina, Ronny, Julie & John (twins), and Lois. He now joins his wife, Regina O’Neill – Romano, who passed just six months ago. They were married in Alaska, February 3rd, 1952, and then moved back to New York where they raised their family together. Anthony attended Hofstra University in New York. He later worked at Grumman Aircraft as an Engineer where he helped with the development of the first crewed spacecraft in the 1960’s - Apollo 11 Lunar Module that was flown from lunar orbit to the Moon's surface. He was also proud of the fact that he was still able to lift 300lbs at the age of 80! Anthony & Regina will be placed to rest at the South Florida VA National Cemetery, in Palm Beach County, Florida, Friday, August 9th, 2019.

The family of Anthony Romano created this Life Tributes page to make it easy to share your memories.

On behalf of the Romano family, it is with deep sorrow, we announce...