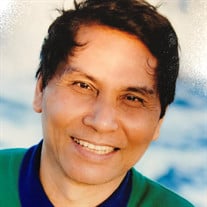 Our beloved Angel “Hiling” A. Rivera, returned to our creator on Friday, December 14, 2018 at the age of 67, surrounded by loved ones. Angel passed away at Martin Memorial Hospital due to internal complications of his condition Neuro-Degenerative Cerebellar Atrophy. Angel “Hiling,” as fondly called by his family and friends, was born on September 7, 1951 to Pantaleon and Encarnacion Rivera in Pulilan, Bulacan, Philippines. He graduated at the Guzman Institute of Technology with a degree in automotive mechanics. He was very simple man who had big dreams for his family. At a young age, he had the courage to work abroad to provide a good life for his family. He spent most of his lifetime working in the Middle East as a heavy duty mechanic for eighteen years. He is known to be a very hardworking man and a man of few words. He believed action speaks louder than words. He was a devoted family man who did everything to provide for his family. He was well admired by many of his relatives and friends because he was able to stand on his own for his family. After working abroad, he returned home to the Philippines to spend time with his family. He loved fixing cars, gardening, improving their home, and farming. He is survived by his wife Elena Rivera of 43 years; daughter Emily (Ian); son Alvin; grandson Aaron; brothers and sisters Rosalina (Mirlo), Erning (Lita), Doming, Bert (Imelda), Tess, Mely, Lyn (Rick); and his nieces and nephews. He is predeceased by his parents Pantaleon and Encarnacion Rivera. A visitation will be held on Wednesday, December 19, 2018, from 5:00 pm to 7:00 pm with a prayer service at 6:00 pm at Taylor & Modeen Funeral Home, Jupiter, Florida. A mass of Christian burial will take place on Thursday, December 20, 2018 at 10:00 am at St. Jude Catholic Church in Tequesta, Florida, followed by the interment at Riverside Memorial Park, Tequesta, Florida. A reception will be held following the burial.

Our beloved Angel &#8220;Hiling&#8221; A. Rivera, returned to our creator on Friday, December 14, 2018 at the age of 67, surrounded by loved ones. Angel passed away at Martin Memorial Hospital due to internal complications of his condition Neuro-Degenerative... View Obituary & Service Information

The family of Angel Alcoriza Rivera created this Life Tributes page to make it easy to share your memories.

Our beloved Angel “Hiling” A. Rivera, returned to our creator...