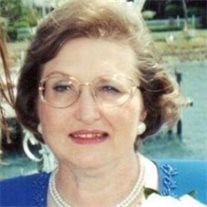 Alana Carnahan of Jupiter, Florida entered eternal rest on January 1, 2015 at the age of 69 after a lengthy, courageous battle with a disabling neurological illness. She was born on January 11, 1945 to Huston and Madalyn Linderman of Perryopolis, Pennsylvania. She was a graduate of Mary Fuller Frazier High School (1963), the Franklin Institute (Philadelphia, 1964), and Barry University (Miami, 2000). After her marriage and relocation to Palm Beach County in 1969, Alana continued her career as a medical technologist. She served over 35 years in the hematology lab at St. Mary's Hospital until her retirement in 2012. She was an active member of the First Methodist Church of Jupiter – Tequesta and a member of the Order of the Eastern Star. She was devoted to her family and loved to cook. Her other interests included travel, investing, and reading. She is survived by her husband, Allen; son Michael Carnahan (Tanya) of Jupiter, FL; daughter Erin Babbitt (Philip) of Tequesta, FL; grandchildren Ava and Ashlyn Babbitt, Gavin and Brooke Carnahan; sisters Iris Wilson (George) of Belle Vernon, Pennsylvania; Sue Craig (Daryl) of West Palm Beach, Florida and Carey Marie Linderman of Catawba, NC, mother-in-law Virginia Carnahan of Port St. Lucie, and a host of nieces, nephews, former professional colleagues, and friends. Alana's family wishes to extend their deepest appreciation to her nurses, therapists, and caregivers at Jupiter Medical Center's Pavilion, 4 South at JFK Hospital, and Hospice of Palm Beach County. They were all incredibly compassionate and caring. A memorial service will be held at 4:00 p.m. Sunday, January 11, 2015 at the First United Methodist Church of Jupiter-Tequesta, 815 E. Indiantown Road, Jupiter, followed by a reception in Fellowship Hall. In lieu of flowers, Alana's family suggests donations in her memory to Hospice of Palm Beach County, 5300 East Avenue, West Palm Beach, FL 33407. Interment will be in Mount Washington Cemetery, Perryopolis, Pennsylvania.

Alana Carnahan of Jupiter, Florida entered eternal rest on January 1, 2015 at the age of 69 after a lengthy, courageous battle with a disabling neurological illness. She was born on January 11, 1945 to Huston and Madalyn Linderman of Perryopolis,... View Obituary & Service Information

The family of Alana Linderman Carnahan created this Life Tributes page to make it easy to share your memories.