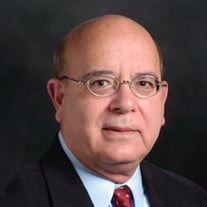 Adalberto Alfonso, Jr., Jupiter, Florida, has passed away from COVID at the age of 76, after several years of suffering from Dementia/Alzheimer’s. Al, was born in Cuba and was a dynamic man that was also a great example of the American Dream. He was an accomplished engineer that retired after 40 years of dedicated service to FPL and NextEra Energy Resources, as Vice President of Distribution at the age of 67. He received several recognitions throughout his career. An avid reader and forever student, Al earned several degrees throughout his career. He was proud of all his alma maters and an active alumni of each which included University of Miami and FIU. His friends and family will remember him best for his great compassionate heart, sense of humor, and love of travel and good food. He most enjoyed sharing a meal with friends and family, whether by his excellent culinary skills or eating out at one of his favorite restaurants. Spanish food was his favorite; he appreciated his Spanish heritage as much as his Cuban birth. Al is survived by his wife Lisa Alfonso, his daughter Magaly Georgina Ramsey (husband William), his grandchildren Christopher Derek and Matthew Dakota Ramsey (wife Francesca Noelle), his father Adalberto Alfonso, his sisters Georgina Perera and Ana Mendoza (husband Agustin), aunt Isis Alfonso, cousin Jose Nabut (wife Maggie), and all the associated nephews, nieces, and grand nephews and nieces. His former wife, Magaly Elena Delgado, also survives Al. A small viewing will take place on Thursday, August 13, from 5:00PM to 8:30PM at Taylor & Modeen Funeral Home in Jupiter, Florida. A Catholic mass will take place the next morning, Friday, August 14 at 10:00AM at St. Peter Catholic Church in Jupiter. A motorcade will leave from the service to Hillcrest Memorial Park following the service for the interment at Hillcrest Memorial Park in West Palm Beach, Florida. Those attending are to keep socially distanced and must wear a mask.

Adalberto Alfonso, Jr., Jupiter, Florida, has passed away from COVID at the age of 76, after several years of suffering from Dementia/Alzheimer&#8217;s. Al, was born in Cuba and was a dynamic man that was also a great example of the American... View Obituary & Service Information

The family of Adalberto Alfonso Jr. created this Life Tributes page to make it easy to share your memories.

Adalberto Alfonso, Jr., Jupiter, Florida, has passed away from...